The contract calls for the fabrication and supply of over 4,800 metric tons of pipe racks, equipment-support structures, platforms, shelters, and other steel products for Saudi Aramco's Jazan refinery, which will be the mainstay of a new economic city fulfilling the objectives of the economic development in Jazan.

The Jazan Refinery and Terminal Project is intended to grow the economy of the southern part of Saudi Arabia by expanding the Kingdom's existing industries to serve domestic needs and rejuvenate the Jazan region by providing employment opportunities. When completed in late 2016, the refinery will have the capacity to process 400,000 barrels per day (bpd) of oil, 75,000 bpd of gasoline, 250,000 bpd of low-sulfur diesel, and 80,000 bpd of vacuum-distillation material to be used as fuel for power plants. Only three other refinery projects on the same scale as this one have been commissioned worldwide in the past 20 years, according to project officials.

Known worldwide as the Middle East's leading structural steel fabricator, Zamil Structural Steel Co. was established in 1983 to provide expertise in the fabrication and installation of structural steel and plate works for a wide range of industrial and commercial applications. The company has gained the confidence of major international engineering, procurement and construction contractors and has built a solid reputation among its customers as a preferred partner for structural steel solutions. 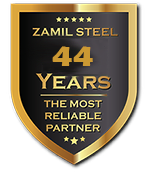